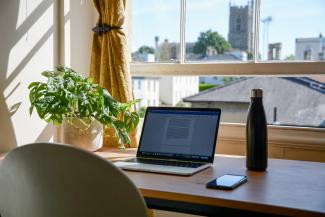 The Work From Home Backlash is Upon Us

It was bound to happen.

You just knew some of these big corporations have been gritting their teeth and smiling through the pandemic with the work from home shift. I’ve been waiting for the inevitable backlash and it appears to be here.

The Wall Street Journal reported this week JP Morgan told senior employees of the bank’s giant sales and trading operation that they and their teams must return to the office by Sept. 21.

Netflix CEO Reed Hastings was profiled in no less than 347 pieces this week on his book promo tour but I was more interested in his comments about the work from home trend than his business philosophy. This was his exchange with Joe Flint of the WSJ on the matter:

WSJ: What elements of the Netflix culture are tougher to maintain now that so many employees are working from home?

WSJ: Have you seen benefits from people working at home?

Mr. Hastings: No. I don’t see any positives. Not being able to get together in person, particularly internationally, is a pure negative. I’ve been super impressed at people’s sacrifices.

WSJ: It’s been anticipated that many companies will shift to a work-from-home approach for many employees even after the Covid-19 crisis. What do you think?

Mr. Hastings: If I had to guess, the five-day workweek will become four days in the office while one day is virtual from home. I’d bet that’s where a lot of companies end up.

WSJ: Do you have a date in mind for when your workforce returns to the office?

Mr. Hastings: Twelve hours after a vaccine is approved.

Tell us how what you really think, Reed.

Netflix is notorious for being a hard place to work. They are far from the only corporation that thinks like this.

There is inequality everywhere you look during the pandemic and the ability to work remotely illustrates this perfectly (via Bloomberg): 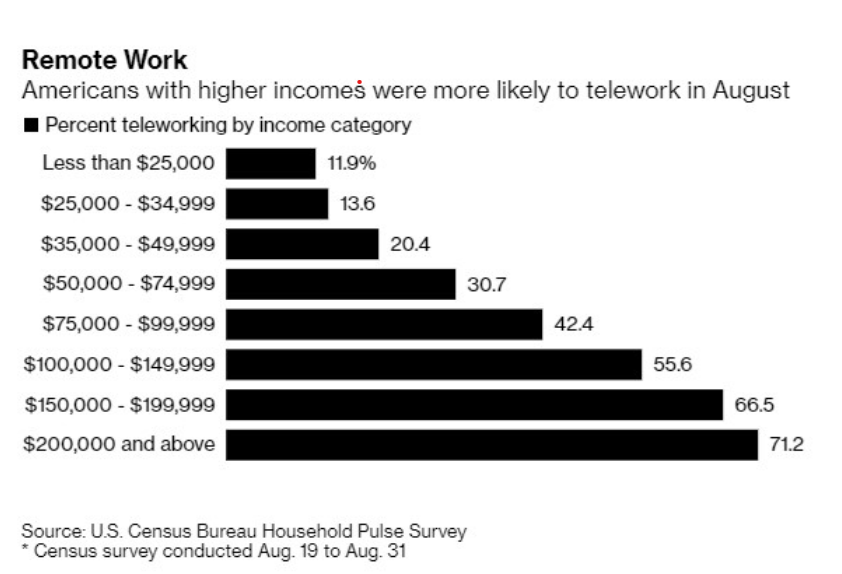 I actually think this is the kind of thing that could work against a lot of high-earners as we begin to normalize (whenever that might be). Working from home will be seen as a perk for many employees and there are sure to be companies that recognize the benefits of allowing their employees more freedom and flexibility.

But there are sure to be many large corporations with the attitude of If you’re making this much money, you better be in the office. People on the high end of the income scale may have the ability to work from home now but I wouldn’t bet on all of them keeping that perk going forward. There will still be plenty of old school firms with the midset of Netflix and JP Morgan on this.

The pandemic has hit people differently not just depending on their income level or ability to work from home but also their stage in life. As a parent, I can confidently say having kids has made this period so much more challenging because school has been so disrupted. Trying to home school while also working from home is like trying to juggle chainsaws while preparing your child a snack.

Many cities and states have gone totally virtual. My daughter is currently doing a hybrid approach where she’s only been in school two days each week. With the large number of dual income households in this country, we are not set up for virtual schooling.

So companies have been forced into allowing more people to work from home because of these circumstances. We’re only 6 months or so into this new world but it appears the non-parents of the world are already annoyed by what this means for their fellow employees with children. This is from a story this week in the New York Times:

When the coronavirus closed schools and child care centers and turned American parenthood into a multitasking nightmare, many tech companies rushed to help their employees. They used their comfortable profit margins to extend workers new benefits, including extra time off for parents to help them care for their children.

It wasn’t long before employees without children started to ask: What about us?

At a recent company wide meeting, Facebook employees repeatedly argued that work policies created in response to Covid-19 “have primarily benefited parents.” At Twitter, a fight erupted on an internal message board after a worker who didn’t have children at home accused another employee, who was taking a leave to care for a child, of not pulling his weight.

When Salesforce announced that it was offering parents six weeks of paid time off, most employees applauded. But one Salesforce manager, who is not permitted to talk publicly about internal matters and therefore asked not to be identified, said two childless employees, reflecting a sentiment voiced at several companies, complained that the policy seemed to put parents’ needs ahead of theirs.

I’m biased here because I’m a parent but I’m surprised there isn’t more of a team element going on at these companies. I suppose some of these young tech non-parents simply don’t understand what their colleagues are going through.

But this issue shows how the work from home trend could cause dissension among employees if it becomes a permanent shift for certain companies.

Are the employees who go into the office more going to resent their colleagues who prefer to work from home?

Will those employees who do show up get preferential treatment and more opportunities for advancement?

Will office politics now include WFH vs non-WFH factions?

In March, many companies were forced into a work from home situation whether they wanted to or not. Considering there were no meetings, planning or upfront technology investments made leading up to that shift, it has gone better than most employees or employers could have dreamed.

But there are bound to be growing pains in the months and years ahead as companies decide how to integrate what they’ve learned over the past 6 months.

This transition is not going to be as smooth as many people think.